Jon Bondy first developed the Original 7 oz Bondy Bait out of a need for a heavy, balanced lure for vertically jigging the Detroit River for musky in the deep shipping channels. Every other bait on the market had problems when using them in that manner. Either they were too light and you couldn't feel the bottom on a choppy day, or the hooks tangled on the leader repeatedly because they were not made for jigging, or they were such poor quality that they couldn't hold up to the beating a big fish would put on them. Jon set out to make the ultimate bait for this deep water style of jigging, and came up with what is now internationally known as the Bondy Bait.

Jon likes to fish the bait primarily for musky, but it works great for any large predatory species. Vertically jig the bait in heavy current by always aiming the bow of the boat into the wind. The idea is to keep the bait, the current and your boat all going the same speed down the river. You usually need to drift along drop offs or breaks in the river to find the fish. Follow along breaks as you jig and pay special attention to any turns or points along the drop.

Instead of using 6"-12" hops as in walleye fishing, make exaggerated 3-4' hops and let the bait fall on a tight line so you can feel the bite. If you let the bait fall too quickly it will sink too fast, and the fish won't react to it like they will on a slow, longer arch.

The Bondy Bait works best when fished on longer rods, at least 7'6", but ideally an 8' Medium-Heavy. Jon Bondy uses a round reel spooled with 80lb Spiderwire Stealth, and 200 lb 14" leaders when jigging. 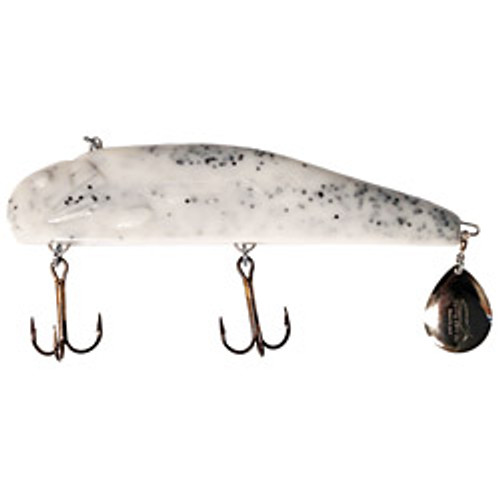